[Editor’s Note: Susan Surapine did this interview with Julia Okrusko for the Claflin Hill Symphony Orchestra (CHSO) newsletter recently. It’s a great way to meet her and to learn a little more about the piece that NWC will help premiere in March. Julia’s website is at http://www.okrusko.com/. Any more questions? Comment on this post and I’ll try to get answers for you.] 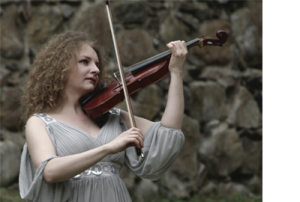 This Spring (March 8th) the CHSO will perform the World Premiere of “Legends: Fantasy Violin” composed by CHSO violinist, Julia Okrusko. We wanted everyone to learn a bit about Julia — so I interviewed her –- and here’s her story!

Julia came to the CHSO back in the 2006-2007 timeframe, and her first gig was the Holiday Pops Concert. That wouldn’t be a tough play for anyone from the US — but Julia was from Lithuania, and she was being introduced to Jingle Bells for the first time! Julia said, “Paul welcomed me very, very warmly and mentioned his own Lithuanian background to me; he was so patient with me getting familiar with Jingle Bells and all the other holiday pieces which were all completely new material for me back then!”

Julia was born in Vilnius, Lithuania, and has been in the States since 2005, and hails from a musical family; she has been playing the violin since age 6. Julia was introduced to music and was taught by her grandparents (grandfather, pianist Vladimir Mayoroff and grandmother, violinist Olga). Later, she began studies at the M.K. Ciurlionis Arts School, where she worked alongside her mother, violinist Natalja Okrusko. Julia’s father, Sergej Okrusko, is a piano professor at the Lithuanian Music and Theater Academy, and throughout her studies in Lithuania he served as her accompanist for solo recitals and chamber programs. Julia’s sister, Nadia, is currently a piano performance student at St. Petersburg Conservatory in Russia, and her Aunt Irina performs as a violinist in Lithuanian State Symphony Orchestra. “In our family, everyone plays a musical instrument, and this tradition goes way back, most likely starting with N. Rimsky-Korsakov, who is a distant relative of our family through his son’s marriage to my grandmother’s aunt. My grandfather, Vladimir, is also a composer and an author of medical literature dealing with musician’s performance health and injury prevention,” stated Julia.

As a student at the M.K. Ciurlionis Arts School, Julia performed during a master class for Boston University Professor, Dana Mazurkevich, who was also raised in Lithuania and had lived there before moving to Russia for her studies with David Oistrakh. Dana visited Lithuania often, and during her visit in 2002 Julia was introduced to her and was fortunate to receive an invitation to come to the United States to become her violin student at Boston University. Julia told us that she is eternally grateful for Dana’s tremendous support during those early years in Boston.

While still studying at BU, Julia received an invitation to play with Claflin Hill and she said, “The CHSO is very different from other orchestras, and being a part of the CHSO is a very unique experience. Over the years, the CHSO has become a family to me — as it has for all of our members. There is a very special energy and warmth in all our rehearsals and performances, and the level of musicianship is incredibly stimulating and inspiring. I started playing in CHSO while I was still a student at Boston University, and I couldn’t imagine a better orchestra to raise me as a performer and composer. It was also CHSO where I discovered the unique connection with the audience, and to me this wonderful exchange of inspiration is the very definition of performance.”

Julia has been with the CHSO ever since, quietly sitting in the violin section. Then, one day this past summer, I clicked on a link she posted on her Facebook page for something called “Legends: Fantasy Violin.” It was Julia, playing violin — and the music was GORGEOUS. I was immediately hooked as I love New Age music — as well as great film scores — and this had the feel of both! I asked for a CD, and waited patiently for it to arrive in the mail. Well, it arrived, and we were going on a road trip… I popped the CD into the player, and just watched the look on Paul’s face. “My God. Get Julia on the phone! We (CHSO) are going to do this entire work this Spring!” Can I tell you how pleased I was with that reaction?

We got Julia on the phone — and gave her the news. She was so excited — but there was one problem — she did the CD out of her head — there was no score! Can you guess what she’s been doing for the past few months? WRITING. Yes, putting every note, for every instrument and every voice down on a chart for the CHSO to play this Spring!! Just wait, everyone! You’ll see what I mean!

I asked Julia what inspired her to write this piece. “My biggest inspiration was ‘Back to the Future’ (2011) [not the movie!] — a project that took place at Boston Symphony Hall where I worked under distinguished movie and video game composers Alan Silvestri, Lucas Vidal and Wataru Hokoyama. Their music, as well as my own passion for movie soundtracks, inspired me to start working on the ‘Legends: Fantasy Violin’ album which was released in September 2013.”

“I actually never thought I would be a composer, although I have always had creative hobbies such as writing poetry, drawing and videography. The project and experience at Boston Symphony Hall was a very impressive musical happening in my life, and I just didn’t want to stop performing cinematic music when the project ended. Almost instantly I started drafting melodies and harmonies — first in my head and later on paper. I wanted to achieve a rich orchestral sound, and I soon realized that I needed to learn how to blend synthetic and live instruments and how to produce the recording tracks. Without formal training in composition, I was also curious about orchestration, and it was at the CHSO where I got to observe the instrumentation and compositional techniques used by the greatest composers — and the performance techniques that are unique to each orchestra instrument and each performer. In a way, each CHSO musician is the inspiration for the orchestration style and overall sound of the ‘Legends’ CD.”

Julia continued, “This performance is one of the most important events in my life. Not only will it be the world premiere of my own compositions presented by the amazing orchestra that inspired the creation of these works, — but also, it will be a very special celebration of musical spirit and the tremendous impact the CHSO has on all our members and audience. As a member of CHSO, I am blessed to be performing with wonderful musicians who raised and inspired me, and who are my friends and my musical family.”